After closely observing New York Fashion Week, two of our famously fashionable strategists – an exec and a junior, one in New York and one in LA – reflected on the trends they saw. Here are some standouts from their conversation.

As New York Fashion Week kicked off the annual international display of fashion, Remi Abbas, Head of Innovation at JMS, and Daniel Simantob, a Junior Strategist, discussed  what lies at the heart of much of New York: work. But New York’s famous diversity also shined through.

Merging cultures and perspectives aren’t the only thing influencing how work shapes fashion. Work itself has changed, and with it, how we dress – “at work” and in our day-to-day lives.

“I graduated college and started working at JMS almost directly afterwards, and I've always worked remote. I was kind of looking forward to, when I started working, kind of having a set style. But now the reality of work is like, I'm changing my clothes three to four times a day… It's interesting to think about the ways that work has changed, influenced the way that fashion has changed, and the way that I dress.” - Daniel

“Traditional” American work culture was on display, too, but with a twist. Denim and workwear, for example, were reorganized and made urban and androgynous – no longer a material for just laborers or cowboys.

“When I think of American clothing, I think of blue jeans, and I think of a very utilitarian style, clothes that are made for the work that you do, that you can then reinterpret, and it just becomes a sense of like a uniform. But now we're seeing brands use denim in ways that a cowboy would never even imagine… It's interesting to completely recontextualize such an American standard.” -  Daniel 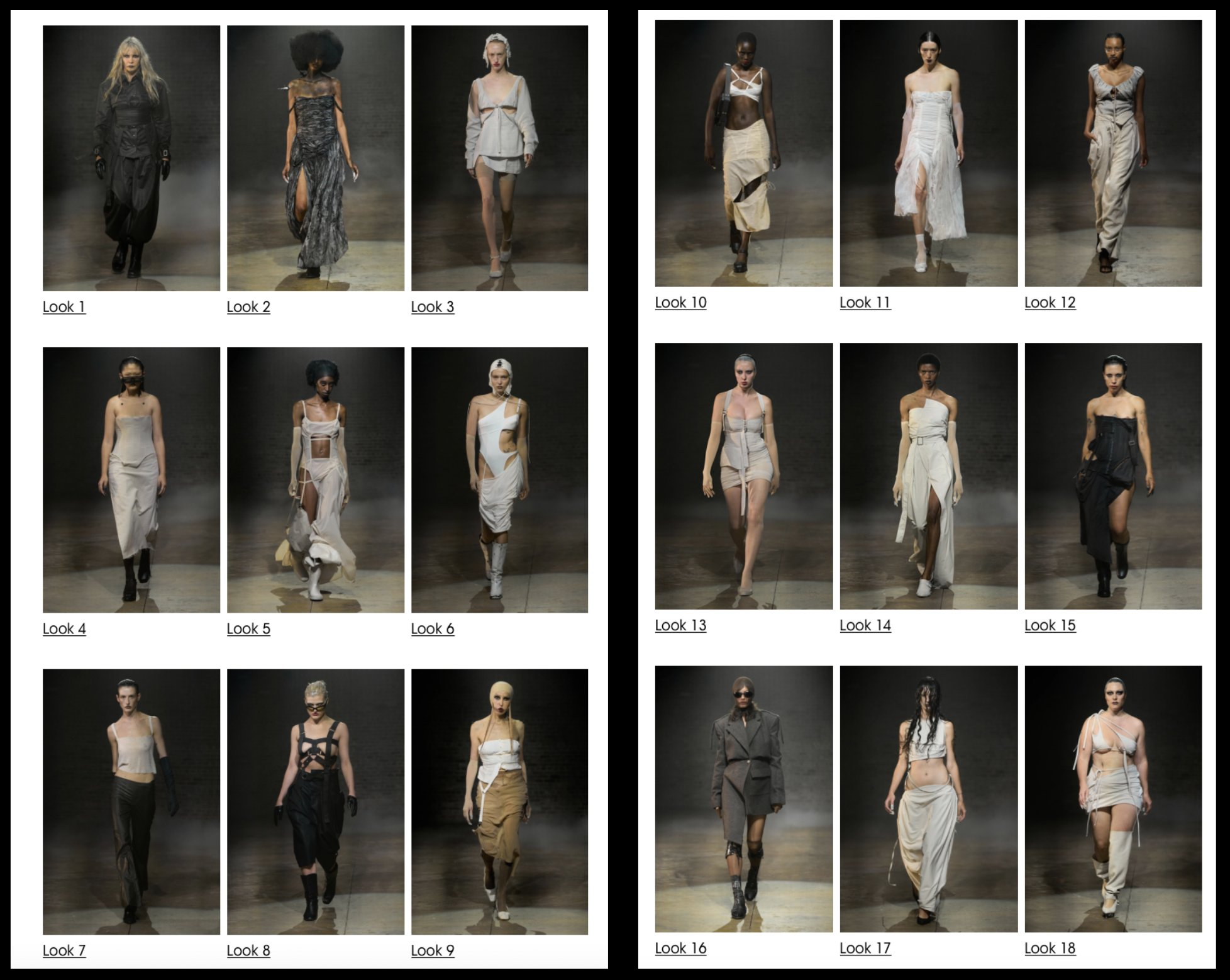 “There is something interesting about juxtaposing the industrial workwear that is part of a heritage… and turning those masculine codes into this kind of feminine silhouette… The idea of kind of taking denim, and then having these almost like, non-gender conforming silhouettes, and a way of using denim that feels genderless or non-gendered, is also really an interesting play on sexuality and gender.” - Remi

The Power Dynamics of Formality

While “work” was a big Fashion Week theme, formal business wear wasn’t. These changes directly coincide with changes in the nature of work itself. T-shirts and jeans, especially in California and the Silicon Valley, are the new “power suit.” But how has this shift in what we wear changed power dynamics?

“My first, maybe you could call it boardroom meeting, where we had a client come in… It was an important conversation, and everybody was in jeans and a t-shirt… It seems like putting everybody in a t-shirt, even when they come back together, it breaks down the barriers, and it generates a completely different kind of work and conversation.” - Daniel “A lot of the symbols of power through dress in the valley are, very, very, very low key, very unassuming, and it's, you know, Mark Zuckerberg in a white t-shirt, but the white t-shirt cost six hundred dollars… It’s a new uniform, with the same power dynamic. And the same cast members are able to execute and control and dominate, with a new uniform and the new myths that come along with this clothing change.” - Remi

Traditional materials and silhouettes were dismantled and reassembled to fit new modes of work and new codes of being. The perfectly pressed clothes we’re used to seeing on the catwalk were replaced with clothes that fit bodies of all kinds. This reshaping of clothing reflects the evolution and reconstruction of communities, power dynamics, and gender.

“One of the things that struck me was that anybody could wear anything. And there was a sense, even the kind three-quarter length cutdowns and the jump suits, they could be male female, non-binary. They had no real gender classification.” - Remi

“I’ve seen a trend of people really wanting to wear what they own and own what they wear. They want to wear it so long that they leave their marks on it. It's almost a symbol of pride to have your wallet fade on the back pocket of your jeans because it means that you bought it, and you liked it enough to wear it so often that it has an imprint of your everyday life on it.” - Daniel

A Sense of Ownership

A big takeaway threaded through Fashion Week was that identity is at the core of everything. Color, silhouettes, uniforms, and fabrics all reflect our identities – at work or otherwise. The ability to personalize clothing and use it to reflect our individuality is key.

“I want to see in the future of retail clothing, especially on the lower price end, that it’s able to last long enough so that people can put patina on their clothes, and can really wear it and have it become a piece of your identity.” - Daniel

The Future of Fashion

As fashion (and our culture) moves forward, Remi and Daniel expect these themes to continue threading through our clothes and how we dress ourselves. Traditional silhouettes, fabrics, and modes of being will meet with evolving thoughts around identity, gender, and class to create a sense of nonconformity in fashion. To execute this, individuals and brands will have to become more resourceful – turning toward vintage, hand-me-downs, and thrift stores – to continue the redefinition of fashion, culture, and self.

Want to hear more? Check Remi and Daniel's conversation on The Edit, on Spotify – or wherever you listen to your podcasts.

Executive Director of Innovation and Social